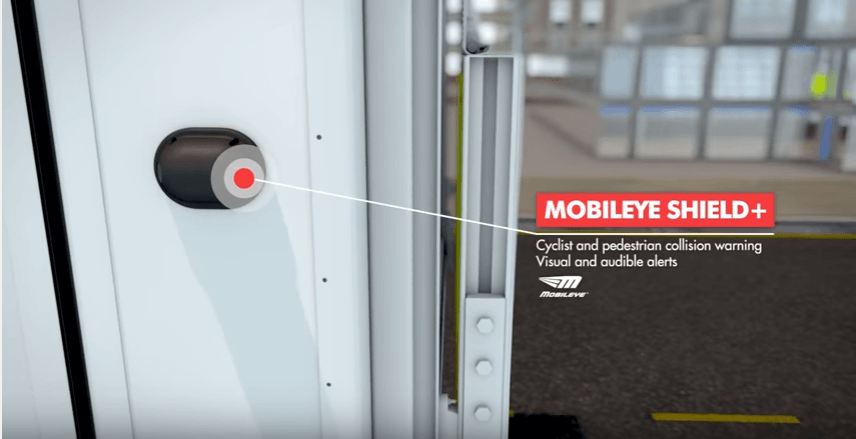 One of the highlights of this year's Commercial Vehicle Show in Birmingham, was the much-anticipated unveiling of the new Terberg DTS UK "Urban Safe" Logistics vehicle. Created in partnership with sister company Dennis Eagle, it is the first ever refrigerated truck by Terberg DTS UK. But what it really represents, is a new level of dedication to safety in urban areas. Beyond slogans and campaigns, this vehicle is a tangible step toward truly reducing collisions in urban areas.

For Managing Director of Terberg DTS, Alisdair Couper, the Urban Safe is the fulfillment of a longtime dream. He told us,

"The vision was to design and build a truck to meet the ever changing needs of the urban supply chain logistics. Safety for both driver and vulnerable road users has been of the upmost importance and at the heart of the project."

The Urban Safe comes equipped with the Mobileye Shield+TM collision avoidance and pedestrian and cyclist detection – designed especially for vehicles with large blind spots such as lorries, buses and commercial vehicles. The system identifies pedestrians, cyclists or motorcyclists in the vehicle blind spots and notifies the driver with an audio and visual warning. The system also provides the classic Mobileye collision avoidance features alerting the driver of following too closely, unintended lane departure and impending collision with the vehicle ahead.

Regarding the decision to equip the vehicle with Mobileye technology, Couper said:

"Mobileye Shield+ technology was the perfect partner and our number one choice collision avoidance system due to its market leading technology, and overall user simplicity. The red and green light system we felt was a better and safer choice as the driver is seeing a signal rather than having to process live footage on a screen (common with other collision avoidance system such as fish eye lenses etc.)"

In addition to Shield+TM, the Urban Safe is outfitted with additional safety features protecting both vulnerable road users around the vehicle, as well as the operator, including in the following areas:


The Mayor of London Reinforces the Campaign
There is a growing awareness in the UK around urban safety, especially accidents involving heavy goods vehicles (HGVs). According to Transport for London, in the span of three years, HGVs were involved in 20% of pedestrian fatalities and over 70% of cyclist fatalities, despite HGVs only making up 4% of road miles in the city. London Mayor, Sadiq Khan, has therefore introduced the "Direct Vision Standard" – a star rating system to rank the safety of HGVs, and only keep those with sufficient visibility on the road. The Urban Safe, was inspired by and in-line with, this vision. We hope it is one of the first of many important moves toward improved urban safety.